I went for a run and came back with an experience.

Eventually I’ll write about it. It’ll be everything a philosophical moment should be. But what I want you to take away from that day at this moment, is an introduction.

You may recall my recent encounters with a proverbial breed of bird: the jive turkey. It seems merely popping into and out of my line of sight is no longer enough for one particularly eager member of this infamous posse. He’s decided to follow me around for awhile. He made himself all cute-like so as I wouldn’t mind him milling about.

JT, as I’ve very originally dubbed him, has begun accompanying me on every run. “The Experience” was his first. He wanted to perch on my shoulder so he could give “the eyes” to people as we passed, whatever that means, but I felt funny about putting him out there for the world to see. I was pretty sure I’d get some “eyes” of my own, which I usually think I want, until the time comes and I discover I don’t, after all. 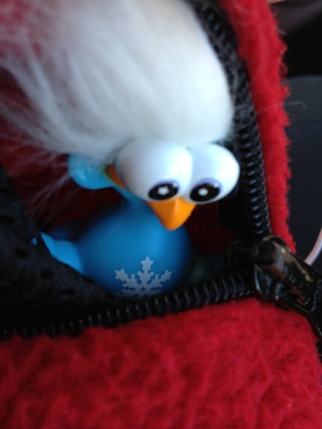 So I hid him in my vest pocket. He didn’t care for it. I didn’t care for that. The day I let a jive turkey tell me how it is is the day I…get lost on a fairly simple park trail and nearly experience hypothermia.

The how and the why aren’t important now. But I second-guessed and turned myself about such that I ended up out there for far longer than I’d planned after a long, taxing run, lost and freezing. JT thought it all very funny. He squawked on and on about my “just desserts” from the pocket and so I reluctantly let him out. He felt vindicated. Really I did it just so I could wrap my hands around his scrawny little neck.

As you might expect when a jive turkey is around, there was a good deal of ice and snow covering the path here and there, despite the fact that temps had been unseasonably warm the previous few days and no other place I had been anywhere had any snow or ice left to it whatsoever. This forced me to undertake trail running much earlier than I had anticipated in my career to keep from wiping out and totally making JT’s day.

As I trod along, hoping I wouldn’t make footfall- or even worse, real fall- onto a fresh pile of dog you-know-what on the banks of the path, I made my way through a brushy area where a flock of birds were having a raucous argument. I was pretty sure it had something to do with my companion. I didn’t mind the noise, though. For some odd reason I rather enjoyed it. I’d been running with my earmuff headphones on before I’d gotten myself lost and it was nice to listen to the natural sounds around me instead.

But as you might expect with a jive turkey wrapped tightly between your thumb and forefinger, what started off so pleasantly ended in disquiet. Actually, in quiet. As in every last one of those birds suddenly- instantly- shut right the hell up as if something wicked that way came and I half expected to turn toward the thicket and see that JT had summoned his friend and business associate Predator to the park to have a little fun at my expense.

Maybe he had, maybe he hadn’t. I’ll never know. I hoofed it out of there without bothering to find out. I finally reached the parking lot and tossed my new sidekick to the passenger seat without buckling him. Sometimes I hold a grudge.

But he’s not going anywhere, as you might expect. In fact, he accompanied me in a race last week and once again I pocketed him and once again things turned out less ideal than I’d hoped.

Maybe I’m going about this all wrong. Sometimes you have to face your detractors out in the open and find out whether you’re operating on resilience and tenacity or doubt and fear. You have to give them the eyes.

Of course, there’s no guarantee they’ll give them back.

8 thoughts on “The Eyes”

Beautiful photos of hiking and other outdoor adventures.