You Can’t Always Get What You Want

When I was a kid, I made a mission out of ruining all my mother’s surprise Christmas gifts.  Not the gifts, themselves, of course, but the surprise factor.  I felt so smart breaking her heart.

Okay, perhaps that’s an exaggeration.  But it did upset her every time I figured out what she had so carefully hidden.  As for me, surprise on the day, surprise a week before, didn’t matter.  My mom always picked winners, and she also made sure that whatever we’d put on our wish lists ended up under the tree come Christmas Eve.

I know what you’re thinking…”What about Santa?”  We didn’t do Santa in our house.  We focused on baby Jesus.  And that was totally okay with me.  The presents came either way.  And I liked that my gifts came from my mom and dad.  It was fun sitting downstairs the night before the night before Christmas while my parents wrapped upstairs, bringing them drinks and snacks and more tape and another pair of scissors and resisting the urge to peek through the barely open door each time, filling up with excitement knowing my brothers and sisters and I would be ripping all that paper open and having the time of our lives the next night.

I know what you’re thinking…”‘Night before the night bef-‘ that means Christmas Eve?”  Yep.  My dad was a cop, and sometimes he worked on Christmas, and sometimes we had to go to Grandma’s.  So Christmas in our house always meant Christmas Eve.  Night.  Again, I didn’t mind.  There was something wondrous about Christmas at night, something special.  Except for the one time some fool stole our (very necessary up north and very expensive for a single income family of seven) snowblower while we were at the school Christmas pageant in the early evening.  But that’s another story…

Probably due, in large part, to my memories, I put a lot of importance on Christmas.  And now that I’m not a kid anymore, it’s my turn to do the surprising.  At least it was this year.  For the first time in her life, Novella allowed me to choose her gifts without any of her own input.  Everything I gave her was unknown.  And she loved it all.  Each sentiment, every offering suited her perfectly, though she might never have chosen any of them for herself.  She flourished under the sway of the element of surprise.

Short Story, on the other hand, was quite explicit in detailing almost every last present nearly a month before the holidays were even on the horizon.  She was so certain, I let her dictate her own course and she received almost everything she led me to believe would please her, make her shine.  But when the day came, I think she was actually a little disappointed.  She hadn’t got the sense of contented resolution she’d been expecting.

The Chipmunks, three of my other children, were just happy to know I still thought of them, as Novella, Short Story and newborn Niche have been getting most of my attention lately.  Them and Prequel Sequel, who still doesn’t realize that Christmas has an end.  I lavished him with so many of his favorite things that he now believes I’ve got something from nothing power to bring to life anything he desires the moment he desires it, all wrapped up in bows and promises, to boot.  He’s too young to know that the realities of life have a tendency to get in the way of all that.

I surprised Wes this year, as ever.  I did not surprise myself when I picked out all my own gifts.  I loved them, of course, but they lacked just a little luster without the trappings of suspense and curiosity.  There’s something lonesome about feeling that no one in your life knows you as well as you do.

Merry Christmas to me!

Or perhaps it isn’t that.  Perhaps the ones who love me know me better than I think.  Maybe better than I know myself.  And it’s possible the gifts they’d give might have been far better, though I might not have chosen them for myself.  Sometimes we get so caught up in writing our own story that we miss all the excitement and glory the alternatives have to offer.  Sure it’s more suspenseful, and it’s hard to trust when everything’s left up in the air, but the payoff just might be more than worth it.

But looking back on my childhood, the surprises were only half the equation.  There were things I definitely knew I wanted in my Christmas story from year to year, and the fulfillment of receiving them gave the unexpected gifts some grounding, a base from which to launch safely.  Novella might not have spelled out her wish list this year, but there were a few items she’d been hinting at for a long time- things I’d known I would give her for years- that finally came to fruition yesterday, and they made the surprises all the sweeter. 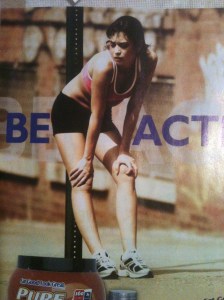 And I got my own unexpected gift within a known gift when I opened my brand new Runner’s World magazine and found this pic and realized that beyond all things possible my legs look better than an ad model’s in a fitness magazine???

So I suppose some of the wonder of Christmas for a child, and the beauty of life for the rest of us, lies both in the fulfillment and security of finding what is sought, and in the unparalleled thrill of walking where you never knew you would, uncovering gifts you never expected you’d find in your own two hands.  It’s quite simple, really.  Any kid can understand it once they’ve been around the Christmas block a few times.

I can’t be sure, of course, as life is always full of surprises, but I’m thinking Short Story just might let me write at least some of her Christmas story for her next year.  You see, I’ve known her from the beginning, far better than she knows herself.  She doesn’t realize it, but I’ve been where she is now, and I know a thing or two about the present game.  I’ve been around the Christmas block at night.  She may not always get what she thinks she wants, but surprise on the day, surprise a month before, it won’t matter.  Mom always picks a winner.

12 thoughts on “You Can’t Always Get What You Want”